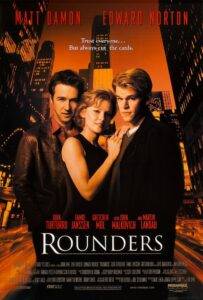 In poker parlance, the term ’rounder’ usually refers to a person who plays poker for a living and, quite literally, ‘does the rounds’, travelling from place to place in search of gambling opportunities. Directed by John Dahl and starring Matt Damon and Edward Norton, ‘Rounders’ is a 1998 drama, which chronicles the attempt by two friends to clear a series of gambling debts.

Mike McDermott (Damon) is a gifted, and honest, poker player, while his childhood friend Lester ‘Worm’ Murphy (Norton) is a self-confessed cheat, who is serving time for distributing counterfeit credit cards at the start of the film. Having lost his entire $30,000 bankroll to Russian mafioso Teddy ‘KGB’ in a single hand, McDermott shies away from poker and focuses on his law studies, working part-time to get by financially.

However, Murphy is released from prison with a previous debt of $25,000 still outstanding, so McDermott begrudgingly sets him up with games and allows him to play on his credit at the Chesterfield Club. Murphy takes out $10,000 and begins a tab in McDermott’s name, before the debt is sold to Grama, a brutish hood employed by KGB. Grama takes the $10,000 and, later, gives them five days to raise the additional $15,000.

Having tried, and failed, to do so, McDermott turns in desperation to his law school professor, Abe Petrovsky (Martin Landau) for a loan of $10,000. McDermott once again faces KGB, heads-up, for the outstanding debt. Having won $20,000, McDermott is taunted into continuing playing, but eventually wins over $60,000, which is enough to pay off all their debts and restore his original bankroll.

It would be fair to say that Rounders divided critical opinion. Stephen Hunter of the Washington Post wrote, ‘It’s a movie of character and milieu, both of which it evokes brilliantly’, while Trevor Johnston of Time Out was less complimentary, writing, ‘The end result is still short of a winning hand, since the screenplay is so utterly predictable.’