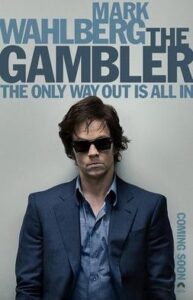 Released in 2014, The Gambler is crime drama written by William Monahan and directed by Rupert Wyatt. It is actually a remake of the film of the same name, written by James Toback, directed by Karel Reisz and released in 1974. The original drew its inspiration from a novella of the same name by celebrated Russian novelist Fyodor Dostoevsky, which was first published in 1866.

Jim Bennett (Mark Wahlberg) is a talented, no-nonsense literature professor at an unnamed Los Angeles college. However, despite his privileged background, Bennett is consumed by self-loathing and self-destructive tendencies, which manifest themselves as desire to fritter away bundles on blackjack and roulette. At the end of the film, Bennett says, ‘I am not a gambler’ and he is not, at least not in the traditional sense of the word.

Bennett does take significant risks, such as offering his own life as collateral for $50,000 he borrows from ruthless loan shark Neville Baraka ( Michael Kenneth Williams) in a vain attempt to recoup the $200,000 he already owes to Korean crime lord Mr. Lee (Alvin Ing). Insightfully, Baraka tells Bennett, ‘I think you’re the kind of guy who likes to lose’, and his gambling habits – continually doubling up bets, chasing his losses and so on – do little to suggest otherwise.

Increasingly desperate, turns to another loan shark, ‘Little’ Frank Brie, and then to his wealthy mother, Roberta, for the money to pay off his debts. Roberta agrees, but Bennett takes the money to a casino and loses it all. Bennett finally manages to pay off Baraka with his winnings from a ‘fixed’ college basketball game and in a last, desperate spin of the roulette wheel, wins enough to pay off his remaining debts.