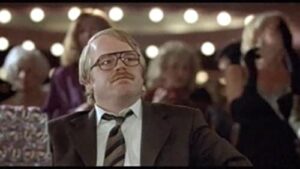 Loosely based on the non-fiction bestseller ‘Stung: The Incredible Obsession of Brian Molony’, written by Gary Ross and published in 1987, Owning Mahowny is a 2003 drama directed by Richard Kwietniowski. The late Philip Seymour Hoffman stars as the eponymous Dan Mahowny, a soft-spoken, generally unremarkable banker who, nonetheless, suffers from an insatiable gambling habit. Deeply indebted to, and temporarily cut off by, his bookmaker Frank Perlin (Maury Chaykin), Mahowny resolves to embezzle sufficient funds from his employer, the Canadian Imperial Bank of Commerce, to clear his debts.

However, Mahowny soon progresses to stealing larger sums and flying to Atlantic City, where unscrupulous casino manager Victor Foss (John Hurt) is only too happy to facilitate his habit. Mahowny, though, has no interest in the perks typically offered to high rollers. Luxury suites, fine dining and top-shelf drinks, not to mention prostitutes, merely serve as distractions from the task in hand. He gambles recklessly, giving little or no thought to winning or losing, but driven solely by the overriding compulsion to get his money – as much as possible – on the table.

Unsurprisingly, Mahowny continues his downward spiral, ultimately committing the largest one-man bank fraud in Canadian history by defrauding his employer of a total of $10.2 million over a two-year period. Inevitably, his wrongdoing is discovered and Mahowny is arrested, prosecuted and imprisoned. However, viewers can take a crumb of comfort from the epilogue, which explains that Mahowny, or Molony, subsequently gave up gambling and married his long-suffering fiancee Belinda (Minnie Driver).

Ann Hornaday of the Washington Post wrote of Owning Mahowny, ‘The filmmakers have taken a bet that an unsexy, unpretty and unconventional movie about bank robbery and gambling can be as captivating as its flashier mainstream counterparts, and they’ve won.’