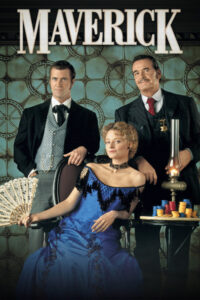 Based on the television series of the same name, starring James Garner in the title role, Maverick is a Western comedy directed by Richard Donner and distributed by Warner Bros. in 1994. Garner, who was in his mid-sixties, once again featured, but as the antagonistic Marshal Zane Cooper. Mel Gibson stars as Bret Maverick, a gambler and con artist intent on raising the $3,000 he needs to enter a $25,000 five-card draw poker tournament aboard Lauren Belle, Queen of the Western Rivers.

On his arrival in the desert town of Crystal River, Maverick encounters fellow hopefuls Annabelle Bransford (Jodie Foster) and Angel James (Alfred Molina), whom he successfully cons out of the money he needs for his entry fee, making enemies of both of them. Nevertheless, Maverick, Bransford and Cooper team up for a series of comedic adventures, including a runaway stagecoach ride, until they encounter a common enemy in the form of the Commodore Duvall (James Coburn), the owner of the Lauren Belle and organiser of the poker tournament.

Maverick and Bransford do, indeed, make it to the tournament, where they are joined by James, with Cooper supposedly taking care of security arrangements. However, Cooper – who is subsequently revealed to be in league with Duvall, as is James – makes off with the $500,000 prize money rather than presenting it to Maverick. Maverick retrieves his winnings, only to be hunted down once again by Cooper, who reveals that, unbeknown to viewers, he is his father. As they congratulate themselves on their subtefugue, Bransford, who has already cottoned on to their real relationship, suddenly turns up at the bath house and robs them.

The films features several uncredited cameo appearances, including by Danny Glover, who starred opposite Mel Gibson in the ‘Lethal Weapon’ series of films. In an early bank robbery scene, the pair exchange knowing glances, but no more.