Fistful of Dollars Slot by Saucify 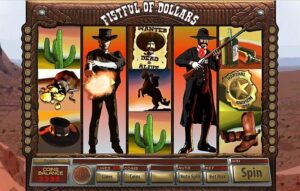 A 30-Payline, 5-Reel slot, called “Fistful of Dollars” by Saucify is quickly becoming one of the most popular titles among their games, especially among those who’ve just discovered them.

This machine accepts multiple coins and denominations which is great considering that the highest paying line could award up to 6,000 coins.

If things line up just right, this slot can also deliver some mind-blowing wins thanks to the expanding Wilds on the second and fourth reels. When you are on a roll, the video game’s sound effects and graphics will keep your adrenaline pumping and important events in Fistful of Dollars will also be animated for your excitement.

The Wild symbols resemble the characters from a Western film from the sixties, as one might expect given the theme of this video slot. This is further confirmed by the similarities between Clint Eastwood and Lee Van Cleef in the first and fourth reels of the game. If the expanding wild appears, it becomes wild and each character will fire a few rounds from their guns if any symbol on the pay-line wins.

Three or more of the scatter symbols, which is a ‘Wanted Poster’ that depicts a smiling bandito who is laughing, anywhere on the screen will spin the poster and you will receive 4x your original wager per winning line when you land 3, 4, or 5 Scatter symbols.

Free Spin resets aren’t mentioned in the pay table, but since Scatters don’t pay, it might be possible to retrigger the bonus game.