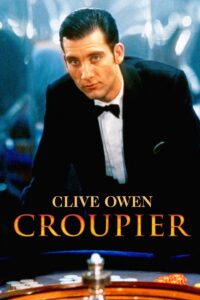 Croupier is a 1998 British crime drama directed by Mike Hodges. The film is a fine example of the neo-noir style and stars Clive Owen as a suitably cynical hero, or anti-hero, Jack Manfred. Manfred is an aspiring, but as yet unpublished, writer, who takes a job at a second-rate London casino by way of inspiration for his novel ‘I, Croupier’.

The use of internal monologue is particularly effective in this instance, with Manfred narrating his own story as if he was putting pen to paper. In so doing, he also reveals his cold, calculating nature and the disdain he holds for the gamblers he encounters in his professional life. Indeed, Manfred insists, ‘I do not gamble’, but, while that statement may be true as far as casino games are concerned, his personal life is less disciplined.

Manfred has a girlfriend, Marion Nell (Gina McKee), who takes a dim view of his new ‘career’. He subsequently becomes involved with Bella (Kate Hardie), a dealer, and Jani de Villiers (Alex Kingston), a mysterious, but nonetheless glamorous, gambler who, like him, hails from South Africa. Heavily indebted to her creditors, de Villiers entices Manfred to become the ‘inside man’ in a plan to defraud the casino, with the promise of £10,000 up front and more to follow.

The scheme fails, but Manfred is free from suspicion, at least from everyone bar Marion, who threatens to reveal his involvement if he continues to work at the casino. Manfred returns to writing, finishing his novel after Marion has been killed, apparently knocked down by a car. Published anonymously, ‘I, Croupier’ becomes a best-seller, earning Manfred a fortune. In a final twist, Manfred is contacted by de Villiers, who is back in South Africa, where she is soon to marry his father, Jack Snr..