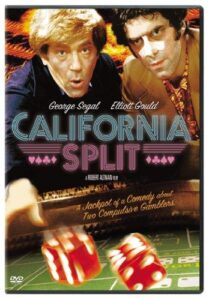 California Split, which takes its name from a variant of draw poker in which the pot is divided, or split, between the high hand and the low hand, is a comedy drama directed by Robert Altman. Released in 1974, California Split turns the spotlight on the west coast gambling scene of the day, as seen through the eyes of two compulsive gamblers. Unsurprisingly, the two main protagonists, Charlie Waters (Elliott Gould) and Bill Denny (George Segal) meet at the California Club, a Los Angeles poker parlour, where their friendship is cemented by being jointly mugged in the parking lot by a disgruntled opponent.

Of the ‘two bet-on-anything guys’, Denny is married, but separated from his wife, while Waters rooms, rent-free, with two prostitutes, Barbara Miller (Ann Prentis) and Susan Peters (Gwen Welles). Both men acknowledge that they have a gambling problem, at least up to a point, but nonetheless embark on a gambling streak, which lasts for several weeks and includes cards, horses, basketball and boxing, for increasing large stakes.

Ultimately, Denny is forced to sell all his possessions, including his car, to fund a trip to Reno, Nevada, by bus, to play high-stakes poker. The elusive winning streak does finally materialise, with Denny winning at poker – against none other than Thomas Austin Preston, Jr., a.k.a. ‘Amarillo Slim’ (who played himself) – blackjack, roulette and craps. Altogether, Denny amasses a total of $82,000, which he splits evenly with Waters, who is naturally ecstatic. Nevertheless, Denny confesses, ‘Charlie, there was no special feeling in it’, and the film ends on a downbeat note, with the two ‘heroes’ going their separate ways. According to Joe Pollock of the St. Louis Post-Dispatch, ‘The conclusion falls a bit flat, but getting there is much more than half the fun.’

A classic online slot machine by the popular Microgaming software developers, Break da Bank can be played at any time of the day on mobile or desktop. It has 3 reels and 5 paylines with engaging gameplay and upbeat music. The return to player is 95.43% for this classic slot, which is a little lower than average, although not by much. In addition, the math model has a medium volatility setting along with a 24-25% hit rate.

Riches and wealth are the timeless draws of this fun and thrilling game. You can bet $5 per spin or $250 per spin with all five paylines active. This game also features a 160-coin jackpot, so there’s plenty for players to potentially win.

In Break da Bank, the logo of the bank acts as a wild symbol. Players can create winning combinations by substituting the wild symbol for any other symbol in the game. The payout is also multiplied by x4 if the wild appears in a winning combination. This Microgaming game offers players enormous winning opportunities.

Just spinning the reels could win the game’s jackpot of 160 coins. Three dollar signs must appear on an active payline for players to win the jackpot.

If the Break da Bank logo is lined up across active paylines, the game’s top prizes will be awarded. This symbol is not only wild but also the highest-paying one in the game. The maximum amount of coins that the player can earn is between 1,600 and 2,400.

This traditional three-reel game Break da Bank has become a hit around the globe thanks to its traditional slot theme. You can play the game for free or for real money on mobile devices and desktops. When players bet the maximum, the top prizes can be huge. 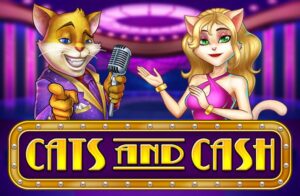 With Cats and Cash, you will purr with delight if you like exciting feline-themed slots. This video slot by Play’n Go has 5 reels, 3 rows, and 15 paylines. A variety of RTP ranges are also available in this medium variance slot. Bets range from 0.01 to 75.00 per spin. Compared with other cat-themed slots, Play’n Go’s game is pretty unique as it combines a game show theme with a cat slot.

Among the game’s features are a scatter symbol represented by a goldfish in a bowl, as well as the wild symbol that acts as a trigger for the Bonus Wheel that provides you with the chance of winning up to 5000x your stake.

In Cats and Cash, players can select from two bonus games based on the bonus symbols featured on the reels. There are also wilds that double all wins, scatters that pay out wins without having to connect a line and five scatters that will pay out 400x the stake.

A player triggers the Wheel of Fortune Bonus by landing three or more of the Bonus Wheel symbols on an active payline. Once the wheel has been spun, players will then receive a prize and a respin if the orange segment lands on the stars.

Another special feature called Pick a Gift will be triggered if three or more gift boxes appear on an active payline. Play’n Go’s version is similar to a game show version of a pick’n’pick bonus. Up to 2000x the stake can be won by picking specific boxes.

The new version of Cats and Cash has been updated from Flash to HTML5, and it offers a maximum payout of 5000x. Make sure you don’t become a scaredy-cat and give it a try.

Croupier is a 1998 British crime drama directed by Mike Hodges. The film is a fine example of the neo-noir style and stars Clive Owen as a suitably cynical hero, or anti-hero, Jack Manfred. Manfred is an aspiring, but as yet unpublished, writer, who takes a job at a second-rate London casino by way of inspiration for his novel ‘I, Croupier’.

The use of internal monologue is particularly effective in this instance, with Manfred narrating his own story as if he was putting pen to paper. In so doing, he also reveals his cold, calculating nature and the disdain he holds for the gamblers he encounters in his professional life. Indeed, Manfred insists, ‘I do not gamble’, but, while that statement may be true as far as casino games are concerned, his personal life is less disciplined.

Manfred has a girlfriend, Marion Nell (Gina McKee), who takes a dim view of his new ‘career’. He subsequently becomes involved with Bella (Kate Hardie), a dealer, and Jani de Villiers (Alex Kingston), a mysterious, but nonetheless glamorous, gambler who, like him, hails from South Africa. Heavily indebted to her creditors, de Villiers entices Manfred to become the ‘inside man’ in a plan to defraud the casino, with the promise of £10,000 up front and more to follow.

The scheme fails, but Manfred is free from suspicion, at least from everyone bar Marion, who threatens to reveal his involvement if he continues to work at the casino. Manfred returns to writing, finishing his novel after Marion has been killed, apparently knocked down by a car. Published anonymously, ‘I, Croupier’ becomes a best-seller, earning Manfred a fortune. In a final twist, Manfred is contacted by de Villiers, who is back in South Africa, where she is soon to marry his father, Jack Snr..